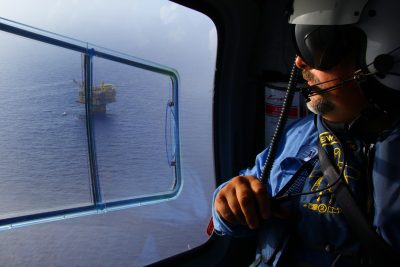 NEW ORLEANS – As part of its mission to protect the environment and in order to ensure that oil and gas companies are able to quickly and effectively respond to offshore oil spills, Bureau of Safety and Environmental Enforcement (BSEE) preparedness analysts and engineers conducted a virtual Government Initiated Unannounced Exercise (GIUE) in the Gulf of Mexico Region on December 1. GIUEs  test an operator's ability to timely employ its Incident Management Team and execute its oil spill response plan.

The exercise required the operator, Empire Midstream LLC, to respond to a simulated oil spill from one of its pipelines traversing through block 110 of the Grand Isle  area, about 60 miles off the Louisiana Gulf coast. The drill simulated that a helicopter pilot reported a sheen from an unknown source, described as 1.5 miles long by 0.5 miles wide, with a 70% silvery and 30% rainbow coloration.

All response actions other than the regulatory notifications were simulated, and the exercise evaluated the ability of the company to quickly mobilize a staff and effectively coordinate a response. The goal was to effectively identify and protect shoreline and sensitive resources, create a spill trajectory forecast, and develop a plan for securing the source.

“Though it might seem counterintuitive, the success of a drill is not necessarily determined by whether shortfalls were exhibited during the exercise or not.” said John Calvin, BSEE senior preparedness analyst in the Gulf of Mexico Region. “The success is in the team's capacity to learn from any mistakes which may have occurred. After all, the best time to become aware of areas for improvement is before an actual emergency response situation arises.”

Representatives from BSEE and the Louisiana Oil Spill Coordinator's Office participated in the coordination and execution of the exercise, which took about six weeks to plan.

GIUEs are designed to give BSEE the opportunity to evaluate an operator’s access to necessary resources and test the effectiveness, performance and viability of oil spill response plans, oil spill equipment and spill management recovery vessels. This was BSEE’s third deployment exercise in the Gulf of Mexico conducted this fiscal year.