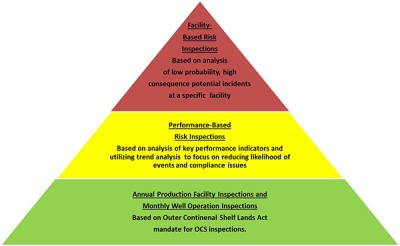 NEW ORLEANS − The Bureau of Safety and Environmental Enforcement this week announced the implementation of a new Risk-Based Inspection Program that employs a systematic framework to identify facilities and operations that exhibit a high-risk profile. The risk-based inspections supplement BSEE’s existing National Safety Inspection Program. The OCS Lands Act authorizes BSEE to conduct annual scheduled inspections and periodic unannounced inspections of all oil and gas operations. The new risk-based inspection protocol looks beyond compliance and assesses the integrity of critical safety systems on facilities and operations, those that have had multiple incidents of non-compliance or events and may need more attention.

Inspection findings and incident reports are used by BSEE to assign a risk factor score to each production facility in the Gulf of Mexico. The risk factor score is based on specific performance and risk-related information that falls into two types of risk-based inspections: “facility based” and “performance based.” Based on analysis of this information, BSEE prioritized the areas that require follow-up under the risk-based inspection protocols.

The implementation of this program demonstrates significant progress by BSEE over the past year. The previous administration was criticized for a slow pace in implementing such a program from 2011-2016. The Government Accountability Office
(GAO), in a 2012 report, noted the need for an approach that would identify and evaluate offshore operations according to risk. In a later report, the GAO again criticized BSEE’s pace in implementing such an approach under the previous administration. This administration focused on making this a priority.

Risk-based inspections allow BSEE the opportunity to focus on compliance issues and reduce the likelihood of incidents across the Gulf of Mexico Region on a continuous basis. BSEE’s first risk based inspections this year will focus on crane operations and will begin this month.

“Our inspectors are the eyes and ears of what’s really happening offshore at any given time,” said Mathews. “Without them, my team would never be able to do their analysis. Together, we strive for continuous improvement so that offshore energy operations are safe for workers and the environment. Director Angelle made it clear this was a priority to improve safety. We are excited about making the OCS a safe place.”