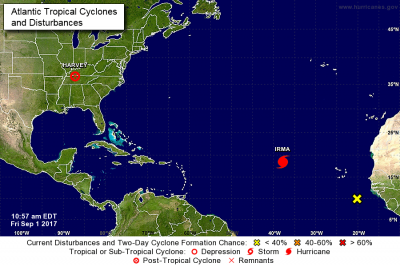 NEW ORLEANS — Offshore oil and gas operators in the Gulf of Mexico are re-boarding platforms and rigs to assesses their ability to resume normal operations following Tropical Storm Harvey.  The Bureau of Safety and Environmental Enforcement (BSEE) Hurricane Response Team continues to monitor the operators’ activities and will work with offshore operators and other state and federal agencies to support a safe return to normal operations.

BSEE inspectors also began overflights of offshore facilities to evaluate facilities and monitor for pollution. At this point, no damage reports from oil and gas operators have been received.

Based on the data from offshore operator reports submitted as of 11:30 CDT today, personnel remain evacuated from a total of 75 production platforms, which represents 10.18 percent of the 737 manned platforms in the Gulf of Mexico. Production platforms are the structures located offshore from which oil and natural gas are produced. Unlike drilling rigs, which typically move from location to location, production facilities remain in the same location throughout a project’s duration.

Personnel have returned to all five of the previously evacuated rigs (non-dynamically positioned (DP) rig), which represented 50% of the total number of rigs operating in the Gulf. Rigs can include several types of offshore drilling facilities including jackup rigs, platform rigs, all submersibles and moored semisubmersibles.

None of the 21 DP rigs currently operating in the Gulf moved off location out of the storm’s path. DP rigs maintain their location while conducting well operations by using thrusters and propellers; the rigs are not moored to the seafloor. Therefore, they can move off location in a relatively short time-frame. Personnel typically remain on-board and return to the location once the storm has passed.

As part of their evacuation process, operators activate applicable shut-in procedures, which can often be accomplished from a remote location. This involves closing the sub-surface safety valves located below the surface of the ocean floor to prevent the release of oil or gas. During previous hurricane seasons, the shut-in valves functioned 100 percent of the time, efficiently shutting in production from wells on the Outer Continental Shelf and protecting the marine and coastal environments. Shutting-in oil and gas production is a standard procedure conducted by industry for safety and environmental reasons.

From Gulf of Mexico operator reports, BSEE estimates that approximately 8.74 percent of the current oil production of 1,750,000 barrels of oil per day in the Gulf remains shut-in, which equates to 152,989 barrels of oil per day. BSEE also estimates that about 12.61 percent of the natural gas production of 3,220 million cubic feet per day, or 405.99 million cubic feet per day, remains shut-in. Shut-in production information included in these reports is based on the amount of oil and gas the operator expected to produce that day. The shut-in production figures therefore are estimates, which BSEE compares to historical production reports to ensure estimate consistency.

Since the storm has passed, operators have begun inspecting facilities and resuming production. Once all standard checks have been completed, production from undamaged facilities is brought back on line immediately. Facilities sustaining any damage may take longer to bring back on line.

BSEE will continue to update the evacuation and shut-in statistics at 1:00 p.m. CDT each day as appropriate.

This survey information is reflective of 28 companies’ reports as of 11:30 a.m. CDT today.