The Water Quality Program is managed under the Environmental Compliance Program (ECP). The Program centers on monitoring, enforcing, and improving the offshore energy industry's compliance with water quality standards, pollution prevention and control standards, and pollution prevention regulations. Its goal is to protect coastal and marine waters.

How does the ECP achieve this goal?

Water Quality Inspections, which include pollution prevention, incident and control requirement compliance as well as discharge/release investigations and applicable enforcement action, are conducted by ECP under BSEE's Outer Continental Shelf Lands Act (OCSLA) authority and implementing regulations as well as in accordance with a 1984 Memorandum of Understanding (MOU) between the EPA and the Department of the Interior (DOI) and the 2012 MOU between the USCG and BSEE and all associated Memorandums of Agreement (MOAs) with both agencies. ECP is responsible for the compliance verification and enforcement of environmental requirements pertaining to water quality as authorized by OCSLA, ensures that facilities operating on the Outer Continental Shelf are in compliance with BOEM approved Plans and related conditions of approval for water quality, as well as performing inspections on behalf of the EPA and USCG on production platforms and drilling rigs through our MOUs and associated MOAs that include MOAs with various EPA Regions, USCG Districts, and USCG Sectors that have overlapping jurisdiction with BSEE Regions that oversee the Gulf of Mexico, Pacific, and Alaska Outer Continental Shelf.

Facility inspections are prioritized on a variety of risk-based parameters such as pollution history, current pollution discharge and release events, BSEE/EPA/USCG/NRC reporting anomalies, and past inspection visits, to name a few. ECP's environmental scientists and engineers regularly utilize BSEE, BOEM, USCG, EPA, and NRC data to assess facility risk related to compliance with environmental and pollution prevention/incident and control requirements. Before performing an inspection, ECP environmental scientists and engineers review and evaluate this data for the planned inspection. When an inspection is completed, a report is prepared and sent to ECP management, EPA, and other agencies, when applicable, (e.g. USCG) summarizing any non-compliance observed and include formal referrals for enforcement action, as appropriate.

Identified non-compliances with OCSLA and pollution prevention, incident, and control requirements result in Incidents of Non-Compliances (INCs) and are potentially referred for civil and/or criminal penalties within BSEE. Identified non-compliances with EPA NPDES permits and/or USCG pollution prevention/incident requirements are referred to EPA and/or USCG to be addressed in accordance with their enforcement programs. ECP also tracks and reviews pollution reports received from various sources to include National Response Center (NRC) pollution reports. Any verified pollution report deemed non-compliant with EPA NPDES permits or USCG requirements are promptly referred to EPA or USCG for enforcement action, as appropriate. When applicable, the matter will also be handled under BSEE's regulatory authority.

Who is responsible for the regulation of water pollution resulting from the oil and gas industry in federal waters?

Growing public awareness and concern for controlling water pollution led to enactment of the Federal Water Pollution Control Act Amendments of 1972 (33 U.S.C. 1251 et seq.). As amended in 1977 (P.L. 95-217), this law became commonly known as the Clean Water Act (CWA). The CWA is the principle law governing pollution control and water quality of the Nation's waterways and is primarily overseen by the U.S. Coast Guard (USCG) and the Environmental Protection Agency (EPA). The CWA establishes conditions and permitting for discharges of pollutants into the waters of the United States under the National Pollution Discharge Elimination System (NPDES) and gave the Environmental Protection Agency (EPA) the authority to implement pollution control programs such as setting wastewater standards for industry and set water quality standards for all contaminants in surface waters. Regulations governing the NPDES program are contained in 40 CFR Part 122.

Through a 1984 Memorandum of Understanding (MOU) between the Department of the Interior (DOI) and EPA and a 2012 MOU between the USCG and BSEE and all associated Memorandums of Agreement (MOAs), the three agencies cooperate and coordinate regarding the oversight of pollution prevention for oil and gas activities on the Outer Continental Shelf (OCS).

Those submerged lands under U.S. jurisdiction seaward of state coastal waters are considered the Outer Continental Shelf and fall under Federal jurisdiction. The Outer Continental Shelf Lands Act of 1953 (OSCLA), and subsequent amendments in later years, outlines the federal responsibility over the OCS. Regulations which BSEE uses to carry out the` water quality related responsibilities under the OCSLA are contained in various areas throughout federal regulations. The specific pollution prevention regulations are located in 30 CFR Part 250.300 (Subchapter C) – Pollution Prevention and Control. The USCG also has federal responsibilities under OCSLA. The MOUs and MOAs between BSEE and the USCG are in place to delineate and facilitate coordination of the activities of the USCG and BSEE in environmental protection.

What kinds of water pollutants are 'permitted' under EPA authority?

Regulations cover all pollution that occurs as a result of the operations conducted by, or on behalf of, a lessee that damages or threatens to damage life, property, mineral deposits, or the marine, coastal , and/or human environments. Water pollutants include produced oil, sand, drilling fluids and cuttings, manufactured or processed hydrocarbons, chemicals, and waste water. Rain water, fresh water, or sea water mixed with any of these constituents is considered a pollutant. Some cooling water intake structures are also regulated under NPDES permits to minimize environmental damage. The current NPDES Permits for the Offshore Oil and Gas Program and supporting information can be found on the EPA’s websites at: 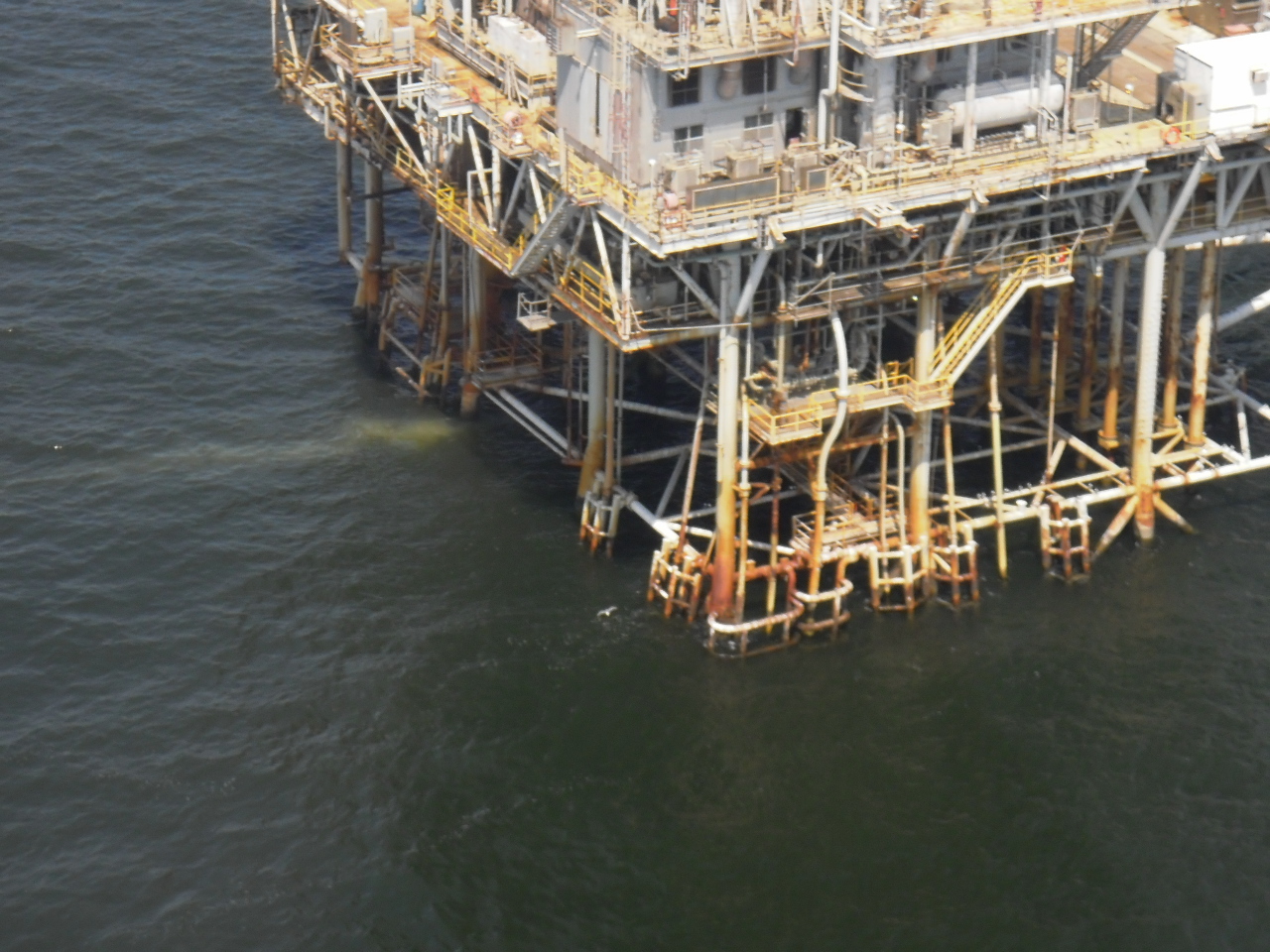 How are pollutant releases or discharges discovered and reported?

What happens after an unauthorized pollutant release or discharge is discovered?