More than 80 percent of global merchandise and trade is affected by standards or by regulations that embody standards.  Imagine if every nut and bolt were made in a different way; and that every time you needed to put a nut and bolt together, you needed a different tool.  The safety issues associated with manufacturing and servicing equipment would make it cost prohibitive.  Standards eliminate the problem by enhancing the safety of industry operations, assuring quality, keeping costs down, reducing waste, minimizing confusion, increasing the acceptance of products, and bringing products to market quicker.

BSEE Must Use Industry Standards 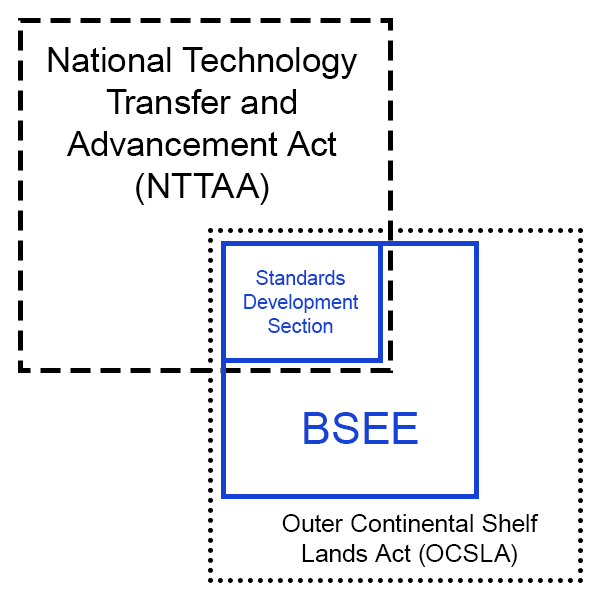 BSEE and the SDS are mandated by two statutes, namely, the Outer Continental Shelf Lands Act (“OCSLA,” 43 USC §§ 1331, et seq.) and The National Technology Transfer and Advancement Act of 1995 (“NTTAA,” 15 U.S.C. § 272, Sec. 12).  OSCLA places all submerged lands seaward of state submerged lands under U.S. jurisdiction and control pursuant to the Secretary of the Interior.  The NTTAA expressly states, “…all Federal agencies…shall use technical standards…to carry out policy objectives or activities…and shall…participate with such bodies in the development of technical standards.”

OMB Circular A-119, “Federal Participation in the Development and Use of Voluntary Consensus Standards and in Conformity Assessment Activities,” is intended to implement the NTTAA and, in so doing, improve regulatory and other policy outcomes.  Particularly, the OMB Circular directs agencies to use standards rather than writing regulations, whenever practical.

The adjacent figure illustrates the overlapping relationship between the entities and the statutes, i.e., BSEE and SDS with respect to OCSLA and NTTAA. 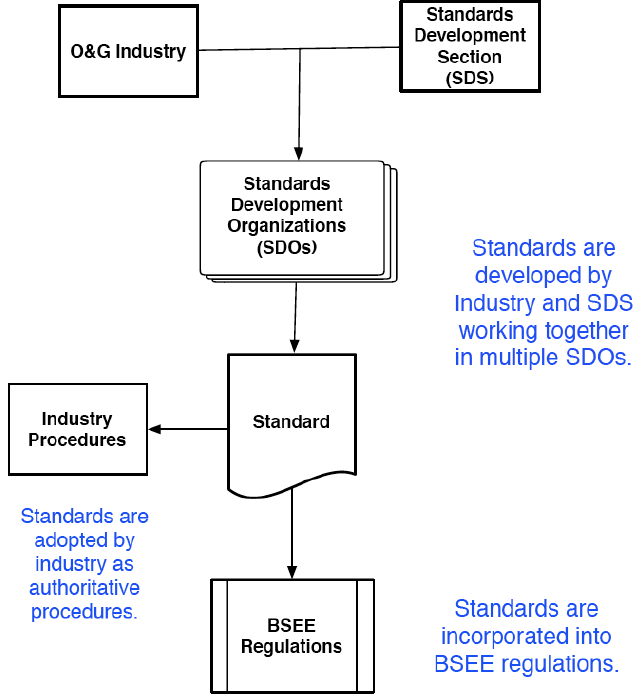 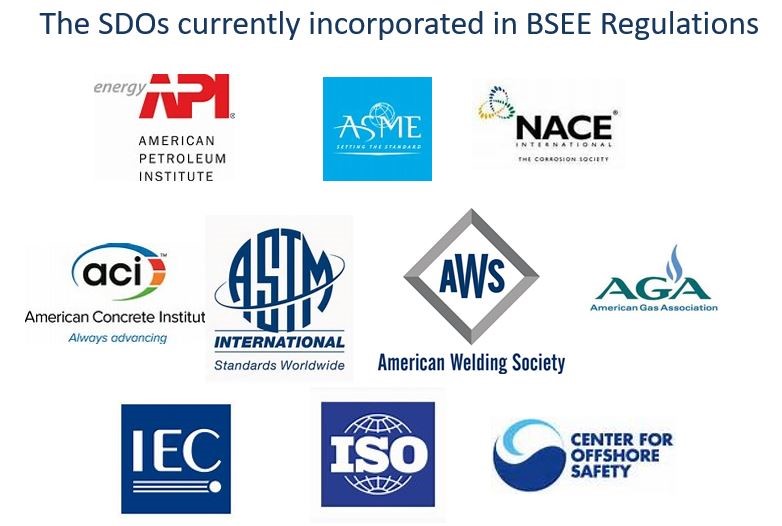 SDOs generally require that a standard be reviewed and updated at least every 5 years.  BSEE has 125 standards IBR in its regulations.  Thus, each year, an average of 25 standards needs updating in the regulations.  Also, new standards are considered for IBR on a regular basis.

Standards that significantly advance safety and environmental stewardship are a priority.  The work of the SDS has significantly advanced the BSEE mission.  Examples of advancing the BSEE mission include an addendum on quality control for supply chains written for API Specification Q1, a new performance-based approach to developing SEMS using API RP 75, a high-pressure high-temperature equipment design document, API 17TR8, and a bolting material guidance document, API 21TR1, to mitigate future bolting failures identified in the BSEE QC FIT report.

A chart of representative standards and their relevance to advancing the BSEE mission are included below:

Standards are the Basis for the Development of Offshore Renewable Energy

SDS is currently working with AWEA and IEC standards committees in the development of offshore wind standards.  Engagement in these committees has contributed to various advancements in the BSEE mission.  The current global state of the industry allows wind farm developers to utilize flagship standards to bring new projects to the execution phase while some developers are opting to utilize a newly created suite of standards that are written specifically for the OCS.