Over the years, studies have documented a connection among fish and other marine life, fishing, and the oil and gas structures in the marine environment. Shortly after a platform is installed, it becomes habitat to marine life and communities begin to grow. Fishermen, divers, and coastal states have been concerned with the removal of these structures heavily-populated with marine life. BSEE began to work with interested parties and coastal states to address these concerns, creating Rigs-to-Reefs. 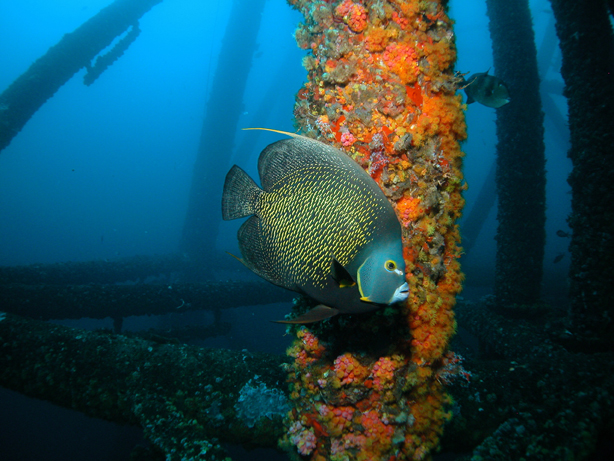 As of December 2021, 573 platforms previously installed on the U.S. Outer Continental Shelf have been reefed in the Gulf of Mexico.

A typical eight-leg structure provides a home for 12,000 to14,000 fish, according to a study by the Coastal Marine Institute.

A typical four-leg structure provides two to three acres of habitat for hundreds of marine species.

In 1984, the U.S. Congress signed the National Fishing Enhancement Act (Public Law 98-623, Title II) because of increased interest and participation in fishing at offshore oil and gas platforms and widespread support for effective artificial reef development by coastal states. The Act recognizes the social and economic values in developing artificial reefs, establishes national standards for artificial reef development, provides for creation of a National Artificial Reef Plan, and provides for establishment of a reef-permitting system.

BSEE is responsible for permitting the placement and eventual removal of temporary facilities on the Federal Outer Continental Shelf (OCS). When an OCS Lease expires and/or development and production operations cease, companies are obligated to decommission and remove their facilities (30 CFR §250.1725(a)) and clear the seabed of all obstructions (30 CFR §250.1740). BSEE responded to coastal states' concerns about losing the marine life that had developed on and around these temporary oil and gas structures by adopting a national Rigs-to-Reefs policy.

The current BSEE Rigs-to-Reefs Policy began by first compiling a database of information to help understand and interpret ancillary uses of oil and gas structures and to inform decisions about the role of these structures in fisheries conservation and development.

BSEE initially negotiated an interagency agreement with the National Marine Fisheries Service (NMFS) in order to conduct studies with the participation of other participants such as Texas A&M University and the oil and gas industry.

Five objectives were identified in this cooperative agreement:

NMFS laid the foundation for Federal endorsement of offshore artificial reefs projects in 1985 when it developed and published the National Artificial Reef Plan under Title II of the National Fishing Enhancement Act of 1984 (33 USC 2101). Since 1985 BSEE has supported and encouraged the reuse of obsolete oil and gas platform jackets as artificial reef material and will grant a departure from removal requirements under 30 CFR §250.1725(a) and applicable lease obligations provided that:

Each state has an artificial reef coordinator, who assesses the state's interest in accepting an obsolete structure. The state coordinator identifies offshore areas which are suitable for reefing, whether existing or newly proposed reef sites, works with the operator to develop a reefing proposal and secures the required permit from the U.S. Army Corps of Engineers.

Concurrently, the operator submits an application for removal to BSEE, which includes the reefing proposal. A reef team reviews the proposal to ensure that all reefing requirements are met. These include the structure being sound, stable, clean, and overall beneficial to the environment, while protecting the Gulf of Mexico's natural resources.

How are the artificial reefs made?

Can all platforms be used for reefing?

No, there are engineering and environmental standards for converting a platform to a permanent artificial reef. Platform size, complexity, structural integrity and location are key considerations in evaluating its reefing potential. Complex, stable, durable and clean platforms are generally candidates for reefing. Platforms toppled due to structural failure are not candidates for reefing.

What are the benefits?

Where can I learn more?